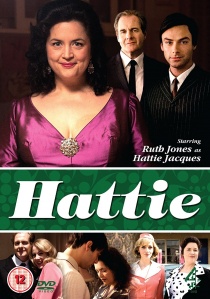 NewsTV SeriesComedyDrama
News Article Go back to homepage
Starring Ruth Jones stars as Hattie Jacques, prepare to be transported back in time into the life of one of the UK's most loved and most enigmatic stars, Hattie, released on DVD on 24th January 2011 from 4DVD.
Graham Fellows, Jay Simpson, Jeany Spark, Aidan Turner, Robert Bathurst, Ruth Jones
Dan Zeff
Richard Osborne, John O'Callaghan, Wendy Griffin, Seb Barwell
4DVD
1 hour 25 minutes
24/01/2011
Thank you for supporting DVD365.net when you order using the link(s) below. As an Amazon Associate we earn from qualifying purchases
Buy DVD
Information

Ruth Jones stars as Hattie Jacques, star of the world-renowned Carry On films, in a bittersweet true-life comedy drama about a very English love triangle and a celebration of an extraordinary icon.

Thanks to the success of the Carry On films, actress Hattie Jacques became famous for playing 'fat and funny' characters. However behind closed doors, Hattie found herself as the star in her very own scandal when - in the middle of filming Carry On Cabby - she begin a passionate affair with her handsome young chauffeur, John Schofield. In Hattie, award-winning actress Ruth Jones (Gavin & Stacey, Tess of the D'Ubervilles) takes on the role of the larger-than-life actress, revealing how Hattie's home life was blown apart by this clandestine sexual liaison.

This intriguing comedy drama documents how, unwilling to eject her husband - actor John Le Mesurier, star of Dad's Army - from the home, and fearing a scandal, she moved Schofield (played by Aidan Turner, Desperate Romantics, Being Human) into the attic bedroom as a lodger. Later, when the affair was discovered the chauffeur swaps places with her husband (Robert Bathurst, Cold Feet, My Dad's the Prime Minister) and joined Hattie in the marital bed.

Set in the bohemian world of 1960s London, Hattie reveals that, in contrast to the matronly roles she played, the real Hattie enjoyed a passionate and illicit love life - risking everything to pursue the man of her dreams.