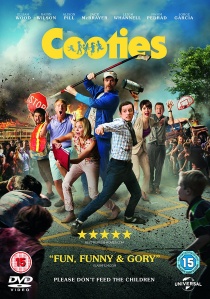 School lunches will forever be tainted after the disturbing and hilarious Cooties arrives on Blu-ray and DVD on 12th October 2015 courtesy of Universal Pictures (UK).

When a cafeteria food virus turns elementary school children into little killer savages, a group of misfit teachers must band together to escape the playground carnage. The film stars Elijah Wood, Rainn Wilson, and Alison Pill as teachers who fight to survive the most unruly students ever on the worst Monday of their lives!

BD
Based on the global blockbuster videogame franchise from Sega, Sonic The Hedgehog, released on DVD, Blu-ray and 4K UHD from 8th June 2020 from Paramount Home Entertainment, tells the story of the ... END_OF_DOCUMENT_TOKEN_TO_BE_REPLACED
Hot PicksView