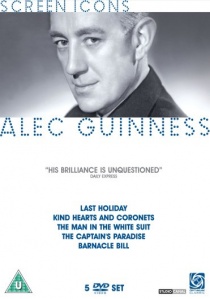 Sir Alec Guinness was one of the Britain's best-loved and most accomplished actors. His illustrious career spanned over fifty years and incorporated some of the most successful and critically acclaimed films in cinema history. A natural film actor, he received many awards for his work including both Baftas and Oscars. Now 1st October 2007 sees Optimum Classics release Screen Icons: The Alec Guinness Collection.

An exceptionally versatile actor, Guinness worked across all genres and was often near-unrecognisable beneath elaborate make-up. With the perfect timing of a comedian and the hypnotic intensity of the greatest dramatic actors, he dazzled audiences in both hard-hitting dramas and side-splitting comedies alike. An unassuming man who preferred anonymity to the glitzy show-business lifestyle, Alec Guinness was a quiet master of cinema acting. One of British cinema's brightest ever stars.

This collection brings together five of the very best comedies Alec Guinness made for Ealing Studios. Each is a comic gem that showcases his astonishing talent. The Man in the White Suit and Barnacle Bill are both classic Ealing David-and-Goliath stories, The Captain's Paradise follows the increasingly farcical life of a bigamist ferry captain, Last Holiday is the tale of a timid man who is given a short time to live, so decides to have a last hurrah and Kind Hearts and Coronets sees Guinness playing all eight members of the aristocratic D'Ascoyne family who suddenly find themselves targets of a ruthless heir.

Louis Mazzini's mother belongs to the aristocratic family D'Ascoyne, but she ran away with an opera singer. Therefore, the D'Ascoynes rejected her and Louis. Once adult, Louis (Dennis Price) decides to avenge his mother and him, by becoming the next Duke of the family. Murdering every potential successor - all famously played by Alec Guinness - is clearly the safest way to achieve his goal.

Sidney Stratton (Alec Guinness), a humble inventor, develops a fabric, which never gets dirty or wears out. This would seem to be a boon for mankind, but the established garment manufacturers don't see it that way; they try to suppress it. Nevertheless, Sidney is determined to put his invention on the market, forcing the clothing factory bigwigs to resort to more desperate measures...

In The Captain's Paradise Alec Guinness plays the thoroughly selfish and conceited Henry St James captaining a ship between Gibraltar and Morocco. When he's in Gibraltar with his straight-laced British wife Maud, played by Celia Johnson (Brief Encounter), he eats at home and goes to bed early. However, when he's with his fiery Spanish wife Nita (Yvonne De Carlo), he stays out dancing into the small hours. Problems arise when his wives begin to demand more than the life he has carved out for each of them, and it doesn't take long for St James' perfect 'paradise' to collapse.

George Bird (Alec Guinness) is a mild-mannered salesman who is told by his doctor that he has only a very short time left to live. Determined not to waste his final days, he decides to go on one last holiday to live the rest of his life to the full. Recently remade by Hollywood with Queen Latifah reprising Guinness' role, Last Holiday was written by renowned novelist and playwright J. B. Priestley.

Captain Ambrose (Alec Guinness) is the last in a long line of distinguished seafarers. Forced to retire due to chronic seasickness, he takes charge of a dilapidated pier in a seaside resort. After he finds out the town's Mayor wants to demolish his beloved pier, Ambrose registers the pier as a foreign cruise ship at anchor - and so free from the law of the land. As the feisty Captain battles with the infuriated authorities, all manner of hilarious antics ensue.

Written by T.E.B. Clarke - writer of The Lavender Hill Mob, The Titfield Thunderbolt and Passport to Pimlico and featuring early appearances by both Jackie Collins and Donald.

DVD
In Brian And Charles, released on DVD and Blu-ray 10th October 2022 from Mediumrare, an inventor lives alone in a remote village in the countryside, inventing useless things out of found objects in his garage. That is until ... END_OF_DOCUMENT_TOKEN_TO_BE_REPLACED
Top PicksView