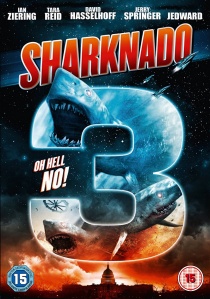 When Fin (Ian Ziering; Sharknado, TV's 90210) and April (Tara Reid; American Pie, The Big Lebowski, Sharknado) head to Florida, they are quickly warned of trouble ahead as the Sunshine State is overcome with strong winds and a dangerous tumult of rain. Suddenly, the pair find themselves in the midst of a terrifying and ruthless Sharknado, but it's just the beginning...

As the sharks tear up the coast and head towards Washington D.C. Fin and April realise time is running out for them to warn the capital, stop the Sharknado for the third time and save the President of the United States from a brutal fate!

Has there been a film series that's ever enjoyed poking fun at itself quite as much as Sharknado?

It's no wonder the series has gained a huge cult following, and this latest installment won't disappoint. It's the biggest, bloodiest and most brilliantly hilarious in the franchise yet.

As ever, tongue is wedged firmly in cheek, giving writer Thunder Levin (Sharknado, Sharknado 2) and director Anthony C. Ferrante license to go all-out. Consequently, the stakes have never been higher, with the Sharknado heading straight for the Whitehouse - the series' most ingenious twist yet.

And as the Sharknado sets out on its path of destruction, there are no shortage of brutal kills, meaning even the most bloodthirsty of gore hounds will be satisfied.

If that's not enough, chuck in a boatload of celebrity cameos, with David 'The Hoff' Hasselhoff (TV's Baywatch, Piranha 3DD), Jedward, WWE's John Cena and even Jerry Springer turning up for a bite of the action, even if most of them are doomed to end up as shark-bait.

Make sure you catch the Sharknado as Sharknado 3: Oh Hell No! is out on DVD 23rd November 2015 courtesy of Kaleidoscope Home Entertainment.