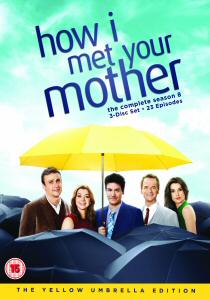 Reacquaint yourselves with the gang when How I Met Your Mother returns for an eighth season filled to the brim with huge revelations and standout episodes. The much-loved, award-winning sitcom hits DVD on 30th September 2013 from Twentieth Century Fox Home Entertainment.

Set in Manhattan, the seven-time Emmy-award winning show stars Josh Radnor (Liberal Arts), Jason Segel (Forgetting Sarah Marshall), Cobie Smulders (Avengers Assemble), Neil Patrick Harris (The Smurfs) and Alyson Hannigan (American Pie); focusing on a future Ted Mosby (Radnor) recounting to his son and daughter the events that led to him meeting their mother, each episode flits back and forth in time to showcase the hilarious hi-jinks and escapades of five friends living in New York.

Season 8 starts with the beginning of the end as we glimpse the future wedding of Barney (Harris) to his bride, shockingly revealed at the climax of the previous season to be Robin (Smulders). Back in the present, the gang contend with 'The Autumn of Break-Ups' as relationships helplessly fall apart, whilst Lily (Hannigan) and Marshal (Segel) host a quiz show to decide who would make the best godparent for their new-born son... With weddings, revelations and clues aplenty, could we finally be on the cusp of learning just how Ted met the mother of his children?

With guest appearances from Seth Green (Austin Powers), Alexis Denisof (Much Ado About Nothing) and Ashley Benson (Spring Breakers), not to mention a cameo appearance from Mike Tyson, now's the time to learn why the hugely-loved sitcom - deemed this generation's Friends - is must-watch television as How I Met Your Mother Season 8 is released on 30th September 2013 courtesy of Twentieth Century Fox Home Entertainment.

BD
Pixar Animation Studios presents Cars, the high-octane adventure comedy that shows life is about the journey, not the finish line, zooming in for the first time on 4K Ultra HD 19th July 2021, ... END_OF_DOCUMENT_TOKEN_TO_BE_REPLACED
Top PicksView