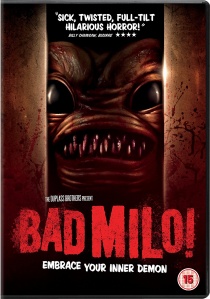 For over a century, Hollywood has been scaring audiences around the world with its terrifying monsters... but none as terrifyingly funny as Bad Milo!, available on DVD on 20th October 2014 from Sony Pictures Home Entertainment. Ken Marino (We're the Millers, Wanderlust) and Gillian Jacobs (TV's Community, The Incredible Burt Wonderstone) star in this shockingly original horror comedy about a man named Duncan (Marino) who discovers he has an actual pint-sized demon living inside him. In order to keep it from popping out and murdering anyone who angers him - including his sweet but pressuring wife (Jacobs) - Duncan must learn to embrace his inner demon and control its killer appetite!

Duncan's (Marino) life is a real pain in the ass. Tormented by a manipulative, crooked boss (Warburton), a nagging mother (Place), a deadbeat new age dad (Root), and a sweet, yet pressuring, wife (Jacobs), his mounting stress starts to trigger an insufferable gastrointestinal reaction. Out of ideas and at the end of his rope, Duncan seeks the help of a hypnotherapist (Stormare), who helps him discover the root of his unusual stomach pain: a pintsized demon living in his intestine that, triggered by excessive anxiety, forces its way out and slaughters the people who have angered him. Out of fear that his intestinal gremlin may target its wrath on the wrong person, Duncan attempts to befriend it, naming it Milo and indulging it to keep its seemingly insatiable appetite at bay.