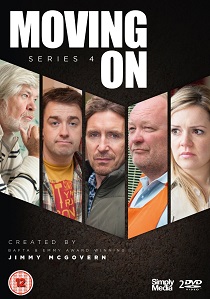 This critically acclaimed long running series features stand alone episodes and has aired a total of 40 across seven series with an eighth series recently confirmed. Moving On explores complex issues from addiction, to depression; the life of a struggling single parent, to the pain of a loved one lost. Lies that should never have been spoken to truths that are hard to hear - all linked by the common theme of characters who reach a turning point in life... and then move on.

Featuring a wealth of well-known faces including Rob James-Collier (Downton Abbey), Olivier award winner Matthew Kelly (Stars in Your Eyes), comedian Jason Manford and BAFTA nominee Paul McGann (Withnail & I) and with one (That's Amore) being directed by the renowned actor and comedian Johnny Vegas (Benidorm) series four was originally broadcast in 2013 with five powerful episodes:

BD
An expert cutter must outwit a dangerous group of mobsters in order to survive a fateful night in The Outfit, released 1st August 2022 on DVD, Blu-ray and 4K UHD from Dazzler Media. END_OF_DOCUMENT_TOKEN_TO_BE_REPLACED
Top PicksView