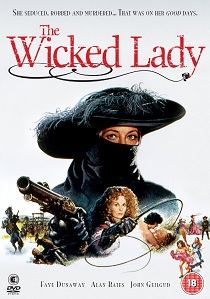 This boisterous caper features screen legend Faye Dunaway (Chinatown) as the titular lead, who appears alongside an all-star cast including Alan Bates (Far from the Madding Crowd), John Gielgud (Chariots of Fire) and Denholm Elliot (Raiders of the Lost Ark).

After seducing and marrying the already betrothed Sir Ralph Skelton (Elliott), Lady Barbara Skelton (Dunaway) finds life very dull, despite her wealth and good fortune. Desperate for excitement and danger she is thrown into the arms of infamous highwayman Jerry Jackson (Bates). Every evening she slips away from home, to join him in his criminal exploits. But how long before her perilous nighttime escapades are discovered?

This remake of the 1945 film, famously caused a censorship storm over a controversial whipping scene between Dunaway and Marina Sirtis (Star Trek: The Next Generation) on its original release in 1983, and now it finally comes DVD for the first time, in its full uncensored glory on 4th July 2016.