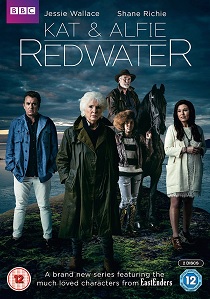 The discovery of a cryptic postcard leads Kat and Alfie to go to Redwater to find Kat's long lost son; the unknown twin brother of memorable EasterEnders' character Zoe Slater. He was taken from Kat at birth and put up for adoption, without her knowledge as she passed out during labour.

The couple pretend to be on holiday in Redwater to cover their tracks, but their arrival quickly draws attention from the locals. Farm owners Adeen (Fionnula Flanagan - Lost) and Lance (Ian McElhinney - Game of Thrones) soon suspect that the Moons are not in Redwater for a holiday and that something more is going on.

Jessie Wallace says: "Redwater feels a mysterious place. It reminds me of Under Milk Wood, it has dark tones to it. It's also a bit like the Wickerman where you're in a strange environment that they've never been in before and they're not made welcome. [Kat and Alfie] are treated like outsiders."

Adeen and Lance are Grandparent's to Andrew (Peter Campion - Brooklyn), the man Kat becomes convinced is her son, and priest Dermott (Oisin Stack - The Family), who is actually Kat's son. Once Kat discovers Dermott is her son, she notes ominously that he has his rapist father's eyes. But how will she feel, when she discovers Dermott is a murderer?

Jessie Wallace feels that: "Being the loyal person that [Kat] is - and a fierce and loyal mother - I think she will protect Dermott when she finds out."