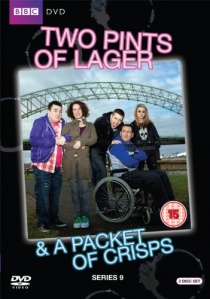 There are some new faces in Runcorn as Susan Nickson's popular sitcom Two Pints of Lager and A Packet of Crisps returns for a fun-filled ninth series. Join these new faces along with some familiar friends in The Archer, when this hit BBC Three comedy is released on DVD on 13th June 2011 from 2entertain.

The latest series of this brilliantly observed comedy introduces Georgia Henshaw (Angus, Thongs And Perfect Snogging, Skins) as Cassie, a feisty young girl who has just been released from a juvenile detention centre and Freddie Hogan (Harry Potter And The Deathly Hallows) as wannabe footballer Billy. The eternally cheery and overly helpful Billy works as a carer for Gaz, who has been left paralysed following his accident at the end of the last series.

As the series opens, Janet and Louise have both left Runcorn and Gaz is struggling to come to terms with how his life can move on. Donna quickly realises her responsibility and helps Gaz to deal with his disability and the two of them cope with Janet leaving together.

When Tim's sister, Cassie, arrives at the pub, surely it means trouble - especially when she has developed a crush on Billy. After many attempts from Cassie, a romance develops and blossoms between them, as well as a 'bromance' between Billy and Gaz.

But will Gaz be able to walk again? And if so, will he be happy to go back to his old life in Runcorn, or will he too see that there is life on the outside?