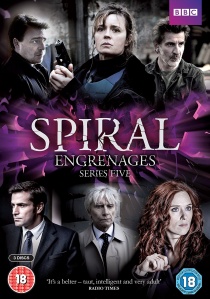 The Parisian police and lawyers return for a gripping fifth instalment of the critically acclaim ed crime drama series. Police Captain Laure Berthaud is in grief, yet her personal life threatens to be derailed further when she receives some unexpected news. Working with her trusted team of lieutenants, Gilou and Tintin, she leads an investigation into a shocking double murder.

Meanwhile, lawyer Josephine Karlsson tries to rebuild her reputation by taking on the case of a man accused of killing a policeman, but things don't quite turn out as planned. Her colleague, Pierre Clément finds himself defending a suspect of Laure's investigation; while Judge Roban is intent on exposing what appears to be a case of police manipulation.

With its nail-biting suspense and constant tension, Spiral, released on DVD by BBC Worldwide on 16th March 2015, is a furiously-paced crime series.

HotUHD
After moving to a new town, two brothers discover that the area is a haven for vampires as the classic The Lost Boys is released on 4K UHD 20th September 2022 from Warner Home Video. END_OF_DOCUMENT_TOKEN_TO_BE_REPLACED
Top PicksView