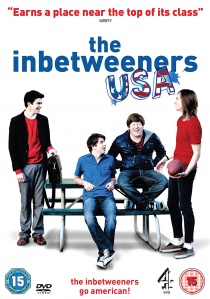 Simon, Jay, Will & Neil are back but something's different. The Inbetweeners go American when The Inbetweeners USA is available to own on DVD from 21st Janauary 2013 courtesy of Channel 4 DVD.

Hailed as "Genius" by the Radio Times, The Inbetweeners won numerous awards and smashed rating records, so it was only a matter of time before America wanted a slice of its sheer brilliance. Developed & written by Brad Copeland (Arrested Development, My Name Is Earl), The Inbetweeners USA is the stateside adaptation of the coming-of-age comedy about a group of teenage boys who are social 'Inbetweeners', neither popular nor misfits.

Out to own on DVD from 21st January, enjoy Bubba Lewis (Simon), Joey Pollari (Will), Mark L Young (Neil) and Zack Pearlman (Jay) in action as the characters made famous by Joe Thomas, Simon Bird, Blake Harrison and James Buckley in the original Channel 4 show.

With familiar jokes and scenes hitting the mark the second time round plus heaps of extras including hilarious behind the scene footage and deleted scenes, enjoy the US version of the smash hit sitcom, available on DVD from the 21st January 2013.

DVD
Released on DVD 4th April 2022 from BBC Worldwide, Golden Globe, Emmy and BAFTA winner Ben Whishaw stars in This Is Going To Hurt, Adam Kay's adaptation of his best-selling memoir about life as a junior doctor. END_OF_DOCUMENT_TOKEN_TO_BE_REPLACED
Top PicksView