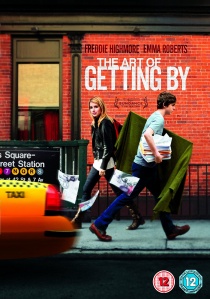 An ode to the trails of teenage life, love and laziness, The Art Of Getting By is released on Blu-ray and DVD on 23rd January 2012 courtesy of Twentieth Century Fox Home Entertainment.

Staring Freddie Highmore (Finding Neverland, Charlie And The Chocolate Factory) and Emma Roberts (Valentine's Day, Scream 4) and written and directed by Gavin Wiesen, making his feature debut, The Art Of Getting By is the story of fatalistic teenager George Zinavoy (Highmore). An expert at coasting through life with the minimum of effort, George is forced to examine his philosophy when he meets the complex and beautiful Sally (Roberts).

With supporting turns from Alicia Silverstone (Clueless, Bad Mother's Handbook) and Blair Underwood (TV's The Event, Dirty Sexy Money and a host of extra features including featurettes New York Slice Of Live and On Young Love, The Art Of Getting By is the perfect start to the year for would-be slackers everywhere.