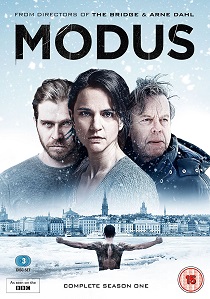 Modus follows criminal psychologist and ex-FBI profiler Inger Johanne Vik (Melinda Kinnaman) as she finds herself and her autistic daughter drawn into an investigation surrounding a series of disturbing and brutal deaths in Stockholm, Sweden.

Together with detective Ingvar Nymann (Henrik Norlén), Inger Johanne uncovers clues to these shocking crimes. As the number of mysterious murders starts to increase, Inger Johanne starts noticing a pattern. However, the discovery of the killer's weakness and the connection to a ruthless international network unintentionally turns the entire threat towards Inger Johanne and her family.

Based on the crime novels by best-selling author Anne Holt and produced by the producers of The Bridge, Modus is a tense, atmospheric crime series that raises questions about religion, human rights, and the very nature of love itself.

Modus is not your classic whodunit but has a complex story that stays away from clichés and stereotypes. The detective thriller has a unique take on modern families and features a flawed female lead character.

The Swedish detective thriller was written by the three times Emmy Award-winning screenwriting duo Mai Brostrøm and Peter Thorsboe. After its success in Sweden, Modus has been commissioned for a second season.