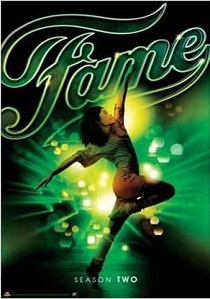 The kids from Fame return, with Season 2 of the Emmy© and olden Globe© Award-winning original TV show. Join Coco, Leroy, Dorothy, Danny, Chris and the rest of gang on their journey to achieve their dreams of stardom, as Fame: Season 2 is available to own on DVD from 18th January 2010. A Fame Seasons 1 and 2 box set is released on the same date.

With a cast including Debbie Allen, Irene Cara, Lee Curreri and Gene Anthony Ray, Fame follows the lives of a group of performing arts students, as they navigate the uncertain waters of youth, competition and pressure, and work hard to shine in the fast-paced world of show business. Experience the feel-good factor and the thrilling trademark song-and-dance numbers which made Fame a huge hit on both sides of the Atlantic.

Dust off your leg warmers and sing along to the theme tune, as the seasoned cast reach for ambitious new heights. In And the Winner Is, Bruno is delighted when his script is chosen for the school production, but he struggles with casting issues. Winners sees Coco audition for a big part in a movie and Doris mistakenly aim for 'perfection' with a crash diet, while Beginnings witnesses Miss Grant confront a racist ballet teacher.

Fame: Season 2 is a must-have DVD for long-time fans of the show and a great opportunity to introduce younger fans to the 80's phenomenon of the original Fame Academy. Featuring 22 exhilarating episodes this is one 80's nostalgia trip that stands the test of time - Fame is going to live forever!