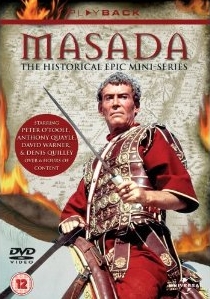 The Jews' Great Revolt against Rome in 66 C.E. ultimately led to one of the greatest catastrophes in Jewish history. When Rome destroyed Jerusalem and the Second Temple in 70 C.E. it signified the end of Jewish opposition to Roman rule. However a group of 960 surviving Zealots fled to the mountaintop fortress of Masada, near the Dead Sea to seek refuge. Lead by Eleazer ben Ya'ir (Peter Strauss; The Jericho Mile) the Zealots made the seemingly impregnable mountaintop fortress their home for the next three years and continued to raid and harass the Romans.

Flavious Silva (O'Toole), commander of the Roman Tenth Legion in Palestine, lead a 5000 strong army to siege the fortress. They established a camp at the base of Masada and began to build a large ramp so their battering rams could be used to breach the wall of the fortress.

Weapons clash and dirty tricks are played in this David and Goliath battle between the powerful and mighty Romans and the passionate and ingenious Jews.