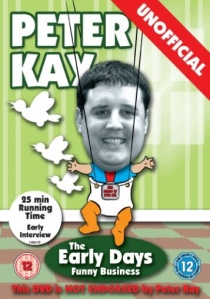 NewsComedy
News Article Go back to homepage
Ever wondered what the biggest stars in TV got up to when they started out? Well, this is your chance, to hear the tips of the trade from the none other than top comedian himself, Peter Kay, Released on 26th November 2007 from Liberation Entertainment.
Peter Kay
Liberation Entertainment
Unknown
26/11/2007
Thank you for supporting DVD365.net when you order using the link(s) below. As an Amazon Associate we earn from qualifying purchases
Buy DVD
Information

Ever wondered what the biggest stars in TV got up to when they started out? Well, this is your chance, to hear the tips of the trade from the none other than top comedian himself, Peter Kay, Released on 26th November 2007 from Liberation Entertainment. This exciting new DVD release in November brings Kay's earliest TV appearance back to the limelight with a fly on the wall, interview and documentary highlighting his gifted talent and past and present successes.

Better known for his appearances on Max and Paddy's road to nowhere and Pheonix Nights, this funny chap, started life out in the North of England, born and raised in Bolton. Peter Kay - The Early Years takes us on a journey through the early days of this quirky man's life, from his job as an usher at the local cinema, to his prized Jimmie Saville soap on a rope.

Presenter and comedy award judge, Iain Coyle zooms back to his very own video interview with the budding star, filmed in 1994. With exciting footage, the intimate interview is filmed in the young, aspiring comic's backyard and bedroom right after Peter received local fame for his competition win for a show in Manchester.

With exciting punch lines and hilarious chat, talking about how he was pushed to start out in the funny game after a speech he made as best man at a wedding months earlier. Even as a youngster Peter had a knack for making people laugh. From sitting on top of a wobbly ladder, to showing off his racy record collection this DVD is absolutely hilarious. See this astounding UK talent before he hit the limelight, hear him at his best.

We take a look back at all of Peter Kay's achievements since he first emerged on the scene in 1994, such as Channel 4's So You Think Your Funny contest, which Kay won in 1997 and also his heavily-promoted show, Live at the Top of the Tower in 2000 where Kay attained mainstream recognition.

Why not laugh out loud this Christmas with the funniest man in UK comedy to date. Peter Kay - The Early Years is a must have over the festive season.