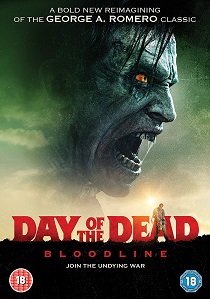 Fight the ultimate war against the undead when the terrifying zombie thriller Day of the Dead: Bloodline arrives on DVD 15th October 2018 from Lionsgate Home Entertainment.

A bold reimagining of the iconic George A. Romero film, Day of the Dead: Bloodline stars Sophie Skelton as a member of the military hiding underground to escape the undead monsters who have taken over the world above. With other survivors, she desperately searches for a cure to the zombie epidemic before it is too late.

Fear goes viral in this terrifying retelling of George A. Romero's zombie horror classic. Five years after an epidemic nearly wiped out the world's population, Dr. Zoe Parker lives in an underground bunker among a small group of military personnel and survivalists, working on a cure while fighting armies of the undead. When a dangerous patient from Zoe's past infiltrates the bunker, he just might hold the key to saving humanity ... or ending it.

HotDVDBD3D-BDUHD
The producers of Godzilla reimagine the origins of one the most powerful monster myths of all in Kong: Skull Island, released on DVD, Blu-ray, 3D Blu-ray and UHD on 24th July 2017 from Warner Home Video. END_OF_DOCUMENT_TOKEN_TO_BE_REPLACED
Hot PicksView