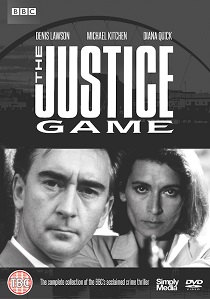 Series One and Two of the BBC's acclaimed crime thriller, The Justice Game, comes to DVD for the first time in the UK courtesy of Simply Media.

New Tricks star Denis Lawson stars as suave criminal lawyer Dominic Rossi, who exposes corruption in Glasgow and loses his heart in Italy in this gripping miniseries from 1989. After a successful career break in America, Rossi returns to his Glasgow roots. As he investigates the fatal stabbing of an elderly man at a bus stop, and defends a tough ex-soldier accused of a vigilante killing, he untangles a shady web of big business. Digging deeper, all trails lead to a Mr Big called Tim Forsythe (Michael Kitchen - Foyle's War) - who will stop at nothing to make sure Rossi doesn't reveal too much.

In series two, Rossi falls in love with the beautiful Francesca (Anita Zagaria - Under the Tuscan Sun) while on holiday in Sorrento, then discovers that many of her friends have been murdered. As he investigates another killing back in Glasgow Francesca shows up, apparently with the Italian murderer in tow. But it turns out she's hiding a shattering truth from her past.

Directed by BAFTA winner Norman Stone (Shadowlands) and written by John Brown (The Flying Scotsman), The Justice Game: Series 1 and 2 arrives on DVD on 10th October 2016.