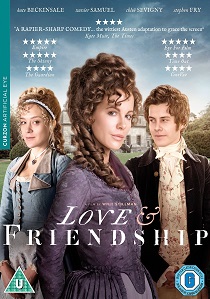 The deliciously scheming and manipulative Lady Susan has come to Churchill, the estate of her in-laws, to wait out the colourful rumours about her dalliances circulating through polite society. Whilst ensconced there, she decides to secure a husband for herself and for her eligible but reluctant school-girl daughter Frederica (Morfydd Clark).

The waters are troubled by the arrival at Churchill of the handsome, eligible Reginald DeCourcy (Xavier Samuel) and silly but cheerful - and very rich - Sir James Martin (Tom Bennett).

Chloe Sevigny, who starred with Beckinsale in Whit Stillman's The Last Days of Disco (1998) plays Lady Susan's friend and confidante Alicia Johnson, with Stephen Fry as her husband, the "very respectable" Mr. Johnson.

DVD
The BAFTA-winning hit Unforgotten, released on DVD 26th April 2021 from BBC Worldwide, returns for a fourth series, as Cassie and Sunny investigate a cold case with alarming links to the police force. END_OF_DOCUMENT_TOKEN_TO_BE_REPLACED
Top PicksView