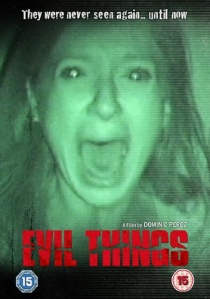 Described as "really creepy stuff" (Stephen Susco, screenwriter of The Grudge 1 and 2), "very tense... engaging" (Terror Firmer) and full of "sheer 's**t your pants' scares" (Arrow In The Head), the critically acclaimed horror-thriller Evil Things comes to DVD on 10th October 2011 from Scanbox Entertainment, giving genre fans plenty of time to line it up for a suitably scary seasonal Halloween viewing.

To celebrate her forthcoming 21st birthday, Miriam invites her college friends Leo, Cassy, Mark and Tanya on a road trip out of Manhattan to visit her Aunt Gail's remote country house. Jumping at the chance to spend a free weekend together in the snowy wilds surrounded by beautiful mountain views and endless woodlands, the friends pile into Miriam's car, with aspiring filmmaker Leo bringing along his new video camera to document the journey and the celebrations.

But their excitement about the leisurely getaway soon turns to anxiety and panic following an encounter with a mysterious van driver along the way and 48 hours later, Miriam, Cassy, Leo, Mark and Tanya have vanished leaving officers investigating their disappearance without a single clue. That is until a copy of what Leo captured on video is delivered to the FBI by an unknown source.

The debut feature from writer-director Dominic Perez, Evil Things is a riveting, pulse-pounding shocker in the tradition of REC, The Blair Witch Project and Paranormal Activity that has earned critical plaudits ranging from "it creeped the hell out of me" (Jonny Metro, Midnite Media) to "the cast is first-rate and the pacing is top-notch" (ResidentMediaPundit.com).

HotDVDBDUHD
The end of the line is only the beginning in a wild, non-stop thrill ride through modern-day Japan as Bullet Train is released on DVD, Blu-ray and 4K UHD 24th October 2022 from Sony Pictures Home Entertainment END_OF_DOCUMENT_TOKEN_TO_BE_REPLACED
Top PicksView