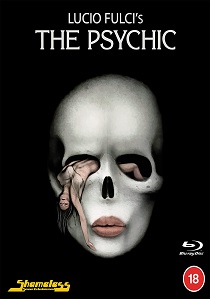 Director Lucio Fulci is widely regarded as the 'Godfather of Gore'. But being famous for his gore-artistry is, somewhat unfairly, to the detriment of the magistral filmmaker that he was. Fulci is revered by Tarantino (who borrowed the tune of The Psychic in his Kill Bill) and other Hollywood mavericks as their avowed influence.

This new edition of The Psychic is exclusive as it has been extensively further restored from new 2K scanned materials to show Fulci's gem like never before; for the 1st time truly doing justice to the Maestro's original vision, making this the definitive world-exclusive version of the film deservedly described by Stephen Thrower in his reference-work on the director: 'The Psychic deserves careful consideration as one of Fulci's best films'

Crafted with intense attention to detail, scripted and delivered in a flawless, almost mathematical, linear fluidity, Fulci builds with each scene a new layer of increasing suspense like no other of his films. This is a Hitchcockian whodunit thriller seen through Fulci's vision of disjointed universes where reality and dreams, the dead and the living, the past and present are all interconnected.

Jennifer O'Neill, fresh from Visconti's last film 'The Innocent', plays Virginia who has had psychic powers since childhood, starting with the trauma of having sensed, from a great distance, the very moment of her mother's suicide... Now newly married and rich, Virginia becomes plagued by waking visions of bloody deaths and meaningless images which torment her. With the aid of her parapsychologist friend (Marc Porel) who carries a torch for her, they try to elucidate the meaning of these horrific unwanted visions only to slowly discover that these are premonitions of future deaths...

HotUHD
A decade-defining classic from the imagination of Steven Spielberg and Chris Columbus, celebrating its 35 year anniversary, The Goonies is released on 4K UHD 31st August 2020 from Warner Home Video. END_OF_DOCUMENT_TOKEN_TO_BE_REPLACED
Top PicksView