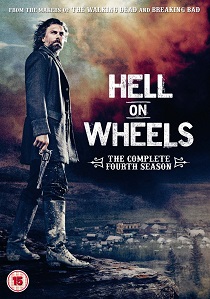 From AMC, the network that brought you The Walking Dead and Breaking Bad and starring Anson Mount (Non Stop, Safe), Common (Selma, Wanted) and Colm Meaney (Con Air, Law Abiding Citizen) comes Hell On Wheels - Season Four - the most thrilling season yet, which makes its DVD bow courtesy of Entertainment One.

Even Hell can freeze over and in 1867, construction work on the Union Pacific Railroad and its seemingly inexorable march westward across the USA has ground to a halt.

As foreman and chief engineer Cullen Bohannon (Anson Mount) struggles to cope with the pressures of fatherhood and marriage, he must also get the ambitious rail project back on track, as well as facing off a vicious power struggle as factions battle for control of the key junction of Cheyenne, Wyoming. Hell on Wheels charts the pioneering spread of rail across the US, along with the power, the corruption, greed and violence that accompanied it.

The series follows Bohannon and the assorted engineers, navvies, labourers, mercenaries, prostitutes and other colourful characters, and their moving camp, dubbed Hell On Wheels, as they build the railroad that will unite a country from coast to coast.

Hell On Wheels, the powerful hit series, created by Joe and Tony Gayton (Faster) and John Wirth (Terminator: The Sarah Connor Chronicles), returns for a fourth outing on DVD as Hell On Wheels - The Complete Fourth Season. It aired in the UK on TCM earlier this year and will be released as a stunning four-disc set, complete with a slew of fantastic special features, on 17th August 2015.

HotUHD
Let an awesome journey unlike any other begin as Stanley Kubrick's dazzling 2001: A Space Odyssey is released on 4K UHD 22nd February 2021 from Warner Home Video. END_OF_DOCUMENT_TOKEN_TO_BE_REPLACED
Hot PicksView