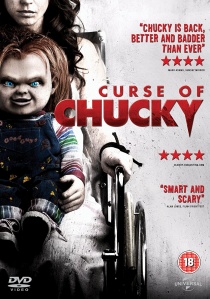 Terror returns in a deceptively tiny package when Curse of Chucky, the newest installment of the chilling Child's Play franchise, comes exclusively to Blu-Ray and DVD on 21st October 2013, from Universal Pictures (UK) and Universal 1440 Entertainment, a production entity of Universal Studios Home Entertainment.

Receiving its European Premiere at Film4 FrightFest at 21.00 on 22 August 2013, Curse of Chucky reunites franchise creators Don Mancini and David Kirschner as Chucky returns to horrify viewers in an all-new, unrated chapter of the blood-soaked suspense saga that James Oster of ArrowInTheHead.com gleefully calls "Delightfully deadly".

"It has been a quarter of a century since fans were first petrified by Toyland's most lethal serial killer in Child's Play" said Glenn Ross, General Manager and Executive Vice President, Universal 1440 Entertainment. "Now, twenty-five years later, the deadly legacy continues as Chucky resumes his disturbing reign of terror, delivering more of the blood-curdling scares and bone-chilling twists that have cemented his place as one of the world's most legendary horror film icons."

Written and directed by Mancini, Curse of Chucky finds a family imperiled by the murderous doll that launched a generation's nightmares - determined to finish a job that was started long ago. The film stars Fiona Dourif (The Master, True Blood), A Martinez (Longmire, General Hospital), Danielle Bisutti (Get Smart, CSI: Miami) and Brennan Elliott (Flight 93, Double Jeopardy), with Brad Dourif (The Lord of the Rings) once again providing the voice of Chucky, the homicidal plaything inhabited by the spirit of notorious serial killer Charles Lee Ray.

Nica (Fiona Dourif) is grieving over the gruesome suicide of her mother when her domineering older sister Barb (Danielle Bisutti) arrives with her young family in tow to help settle their mother's affairs. As the sisters butt heads over Nica's plans for the future, Barb's young daughter comforts herself with a grinning, red-haired talking doll named Chucky (Brad Dourif) that recently arrived mysteriously in the mail.

But as a string of brutal murders begins to terrorize the household, Nica suspects the doll may hold the key to the bloodshed. What she doesn't know is that Chucky has a personal score to settle. He's determined to finish a job he started more than 20 years earlier, and this time he's going to see it through to the bloody and shocking end.

DVD
Two lifelong friends find themselves at an impasse when one abruptly ends their relationship, with alarming consequences for both of them in The Banshees Of Inisherin, released on DVD and Blu-ray 30th January 2023 from Walt ... END_OF_DOCUMENT_TOKEN_TO_BE_REPLACED
Top PicksView