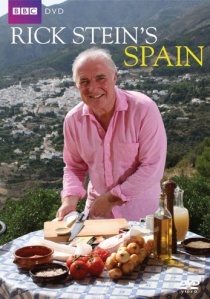 News
News Article Go back to homepage
In Rick Stein's Spain, released on DVD by 2entertain on 8th August 2011, the celebrated chef Rick Stein undertakes a journey laced with history, literature and stunning imagery, through the hidden parts of Spain.
Rick Stein
David Pritchard
David Pritchard
2entertain
Unknown
08/08/2011
Thank you for supporting DVD365.net when you order using the link(s) below. As an Amazon Associate we earn from qualifying purchases
Buy DVD
Information

In Rick Stein's Spain, released on DVD by 2entertain on 8th August 2011, the celebrated chef Rick Stein undertakes a journey laced with history, literature and stunning imagery, through the hidden parts of Spain.

Rick Stein has visited Spain since he was a young boy. According to Rick, no one cooks fish with more respect or grills meat better. Now, he travels the length and breadth of the country in an old campervan, going off the beaten track to discover the 'Duende' - the authentic soul of Spanish cooking.

Rick learns all about 'pinxos', the tapas of the north, while in San Sebastian, then it's on to Navarra and its most famous town, Pamplona - known for its bull running, Ernest Hemingway - and the Catalonian town of Lleida, which is crazy about snails! Continuing his journey through the spectacular countryside, Rick also eats some of the best seafood in the country, including prawns from Palamos, best simply tossed in a hot pan with sea salt - sweet and succulent!

After a spectacular paella festival in Valencia where the iconic dish was first created, the campervan moves towards the centre of the country, the land of Don Quixote in Castilla-La Mancha, where Rick visits the vineyard of Campo de Criptana and joins the local garlic farmers for the best garlic soup in the world. He finishes his travels in Andalucia's fabulous city of Seville where the old world met the new world and changed the way we ate forever.