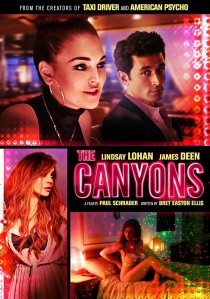 Manipulative and scheming young movie producer Christian (adult film star James Deen) makes films to keep his trust fund intact, while his actress girlfriend and bored plaything, Tara (Lindsay Lohan), hides a passionate affair with an actor from her past. When Christian becomes aware of Tara's infidelity, the young lovers are thrust into a violent, sexually-charged tour through the dark side of human nature. Featuring fearless and unprecedented performances from its young cast, The Canyons is a thought-provoking examination of the dangers of privilege and seedy world of the adult film industry.