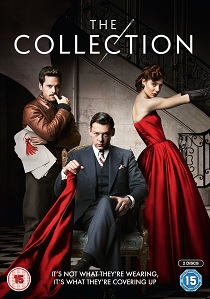 The Collection, released on DVD by BBC Worldwide on 20th March 2017, is a tale of secrets, lies and high fashion from writer Oliver Goldstick (Pretty Little Liars, Ugly Betty).

A gripping relationship drama where scandal and secrets plague a fashion family's pursuit of success. Set in an illustrious Parisian couture house in 1947, the series explores the grit behind the glamour, and treachery beneath the glittering trappings of a business run by two clashing brothers.

Paul is the acceptable face and business brain while reckless Claude is the creative genius in secret. They're nothing without each other, but rivalry, deception and hateful bargains made to survive the Nazi occupation threaten to topple this "first family" of fashion at every turn.

Reinvention and transformation are fashion's ultimate metaphors. But can the Sabines escape their past?