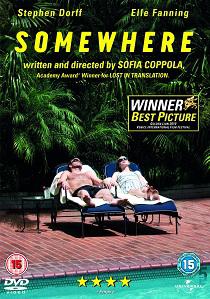 An intimate story set in contemporary Los Angeles, Somewhere is a witty, moving and empathetic look into the orbit of Hollywood actor Johnny Marco (played by Stephen Dorff).

We join Marco as he stumbles through a life of excess, living out of the legendary Chateau Marmont Hotel; he has a Ferrari to drive around in, and a constant stream of girls and pills to stay in with. Comfortably numbed, Johnny drifts along.

Following an unexpected visit from his 11-year-old daughter, Cleo (played wonderfully by Elle Fanning), their encounters encourage Johnny to face up to where he is with life, and confront the question that at some point we all must; which path in life will you take?