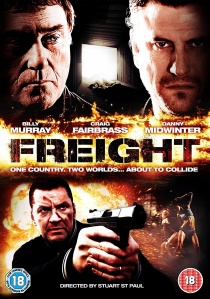 Set in the criminal underbelly of contemporary Britain, Freight features a wealth of UK acting talent including Billy Murray (Eastenders, The Bill, Call Of Duty), Craig Fairbrass (Rise Of The Footsoldier, The Bank Job), Danny Midwinter (Dead Cert) and Laura Aikman (Not Going Out). It shines as a fast-paced, controversial, gritty action movie exposing the horrifying and hard-hitting realities of human trafficking in the UK. Freight is set and filmed entirely in Yorkshire, UK.

Gabe Taylor, former East-end gangster and contemporary of the Krays, and ex-SAS, now, a streetwise family man, is thrown into a turf war when his daughter (Laura Aikman) is kidnapped by Eastern European criminals.

The ferocious gang make their money trading in human beings; enslaving the imported women in seedy sex clubs, while forcing their devoted husbands to fight in front of blood-thirsty betting spectators, always with the promise of a better life in the UK just one fight away. Explosive, non-stop action ensues as Jed (Craig Fairbrass) helps Gabe battle to save his daughter and his city from chilling Romanian mafia boss Cristi (Danny Midwinter).

After a limited theatrical run in the UK, and a series of film festival premiers around the globe, the DVD release of Freight is highly anticipated. Winner of the Best Actor and Best Director awards at the Brackenridge USA Film Festival, Freight was awarded the prestigious Silver Palm at the Mexico International Film Festival 2010, and received several nominations at the Los Angeles Action In Film Awards, including Best Special Effects and Best Foreign Film (outside of North America).

Hailed as Britain's answer to Taken, Freight is an unashamedly political film which tackles a very real problem, not just in the UK, but the world over. It puts into motion what many people in the UK think about the country, its politicians, the police and the laws on immigration. It is however a delicately balanced film showing a tolerant multiracial country of people who will fight for what is right.