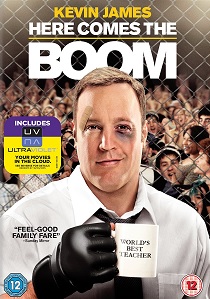 The movie delivers big laughs as Kevin James creates the character of Scott Voss, a high school biology teacher who gets into the Octagon as a mixed martial arts fighter to raise money when his school's music programme is threatened.

James says, "Here Comes the Boom is a hero story of a guy at a failing school who has lost his inspiration and through this journey becomes inspired as a teacher. Through him, other people become inspired, especially at the school. He's an everyman who gets the rare opportunity to step it up".

The Here Comes The Boom Blu-ray and DVD bonus features include 17 deleted scenes, a gag reel and Here Comes the Cast, a featurette on the star studded cast. The Blu-ray also exclusively includes an additional six behind-the-scenes featurettes: The Pros gives fans a look at the real MMA fighters that appear in the film; The Three Amigos showcases the camaraderie of Mr. Voss' training team - Rutten, Winkler and DellaGrotte - and the fun they had on set; Back To School is a peek at Winkler "helping" James train; Learning How To Fight takes a look at James getting schooled in the world of MMA; Gino Vs. Ritchie chronicles a fun on-set challenge; and Disco Street Fighting, an in-character piece in which Niko creates a tutorial.

Former college wrestler Scott Voss (Kevin James) is a 42-year-old biology teacher in a failing high school. When cutbacks threaten to cancel the music program and lay off its teacher (Henry Winkler), Scott begins to raise money by moonlighting as a mixed martial arts fighter. Everyone thinks Scott is crazy - most of all the school nurse, Bella (Salma Hayek). But in his quest, as Scott becomes more and more committed to fighting for the students, he becomes a sensation that rallies the entire school.

3D-BD
Following the global success of Godzilla and Kong: Skull Island comes the next chapter in the cinematic Monsterverse in Godzilla II: King of the Monsters, arriving on DVD, Blu-ray and 4K UHD 7th ... END_OF_DOCUMENT_TOKEN_TO_BE_REPLACED
Hot PicksView