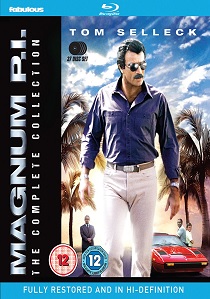 Vietnam veteran Thomas Magnum (Tom Selleck) leaves the Navy to take up position as a private eye and security advisor to famous author Robin Masters in the cultural melting pot of 1980's Oahu, Hawaii. He is soon living the high life with Master's beachfront mansion and Ferrari, but soon the idyll is not all it seems and Magnum is drawn into the island's underworld.

An impressive 130 hours of television across 157 episodes over 8 seasons of groundbreaking and unconventional storytelling, join Magnum for a thrill ride of explosive action and frantic chases in the unforgettable Emmy® Award and Golden Globe® winning series, now available fully restored and in high definition for the first time.

Magnum P.I. - The Complete Collection is released on Blu-ray by Fabulous Films on 12th December 2016.

DVD
A 13-year-old girl named Meilin turns into a giant red panda whenever she gets too excited in Disney and Pixar's 25th feature film Turning Red, released on DVD, Blu-ray and 4K UHD 2nd May 2022 from Walt Disney Home ... END_OF_DOCUMENT_TOKEN_TO_BE_REPLACED
Top PicksView