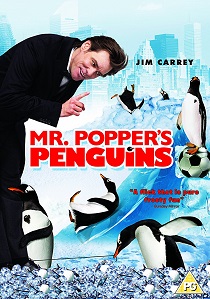 Just in time for Christmas, enjoy Jim Carrey (A Christmas Carol) in Mr. Popper's Penguins, on Blu-ray, DVD and digital download on 12th December 2011 from Twentieth Century Fox Home Entertainment. The whole family will be full of laughs watching Mr. Popper, a driven businessman who is clueless when it comes to the important things in life until he inherits six, "adorable" and mischievous penguins.

As Mr. Popper quickly gets acquainted with - and increasingly attached to - his winged roommates, his life quickly unravels: the deal he's long been working on with a formidable socialiate, Mrs. Van Gundy, played by the acclaimed Angela Lansbury (Murder She Wrote, Beauty and the Beast), is derailed and Popper almost lands in jail. While Popper's penguins turn his swank New York apartment into a snowy winter wonderland - they teach him valuable lessons about family- human and otherwise!

From the director of Freaky Friday and Mean Girls and the producer of Gulliver's Travels and the Garfield franchise, Mr. Popper's Penguins will be available on 12th December 20111 on Blu-ray, DVD and digital download. The Blu-ray and DVD also feature a never-before-seen animated short, Nimrod & Stinky's Antartic Adventure, in which Zookeeper Nat Jones flies to the antarctic determined to get Popper's Penguins back. The penguins, led by Nimrod and Stinky, outsmart him once again.

Related Articles
Bad Santa 2, Vampire Academy, Ghosts of Girlfriends Past, Mean Girls: 15th Anniversary Edition
Tommy's Honour, The Autopsy of Jane Doe, Hooten and the Lady, W1A, Mr Sloane, 8 Minutes Idle, Nowhere Boy, This England
The Space Between Us, San Andreas, Wayward Pines, I Melt With You, Sucker Punch, Night At The Museum, The One: Special Edition, Snake Eyes, Spy Kids, Haunting of Hill House: Season 1, The One
Dumb and Dumber To, A Christmas Carol, Yes Man, Horton Hears a Who!, The Number 23, Dark Crimes, A Series of Unfortunate Events, Batman Forever, Dumb and Dumber, Earth Girls are Easy, Eternal Sunshine of the Spotless Mind, The Mask, Me, Myself and Irene, Truman Show, Sonic The Hedgehog, Sonic The Hedgehog 2
The Manchurian Candidate, Beauty and the Beast, Murder She Wrote: Season 6, Dr. Seuss' The Grinch, Blue Hawaii
Much Ado About Nothing, 500 Days of Summer, The Air I Breathe, Marvel's Agents Of S.H.I.E.L.D. - Season 5, Captain Marvel
Once More, Machine Gun Preacher, The Spy Next Door, Swing Vote
Comments
DVD Releases News Pick