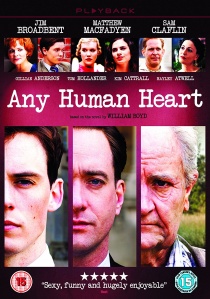 Any Human Heart, William Boyd's compelling and entertaining story of one man's emotional and unpredictable journey through every decade of the 20th century, comes to Blu-ray and DVD from 27th December 2010 courtesy of Universal Playback. Jim Broadbent, Matthew Macfadyen and Sam Claflin take on the three generations of Logan Gonzago Mountstuart and the "emotional, dramatic and rackety journey that is his long and tumultuous life" (William Boyd).

From the director of The Last Days of Lehman Brothers and The Curse of Steptoe, this unmissable and captivating four-part drama boasts an all-star cast and a screenplay by William Boyd from his own best-selling novel. Oscar-winner Jim Broadbent (The Young Victoria, Longford) is the older incarnation of Boyd's literary everyman, Mountstuart, playing the fictional writer through his final years: London in the 1970s and '80s, the shame of poverty, unlikely heroism and not-so-serene old age in '90s rural France.

Matthew Macfadyen (Little Dorrit, Frost-Nixon) takes Logan through middle age, from the thrill and heartache of true love and the birth of his first child, via the horrors of war, to scandal in the New York art scene of the 1950s and '60s. Finally, Newcomer Sam Claflin (the forthcoming Pirates of the Caribbean: On Stranger Tides, The Pillars of The Earth) embodies the idealism, vitality and naïvety of the young Logan, whose lust for life and women truly begins as a student at Oxford and then in Paris of the '20s.

From failed marriages, numerous flirtations and affairs, to true love, the women in Logan's life are many and varied. Hayley Atwell (The Prisoner, The Duchess) plays Freya, his mistress and the love of his life; Natasha Little (The Boys Are Back, Mistresses) is third wife Alannah; and Kim Cattrall (Sex and the City, My Boy Jack) takes on the role of older Logan's glamorous lover, Gloria. Logan also has encounters with Ernest Hemingway, Ian Fleming (Tobias Menzies, Rome, A Very Social Secretary) and the Duke and Duchess of Windsor (Tom Hollander, Gosford Park, In The Loop, and Gillian Anderson, The Last King of Scotland, The X-Files).

Any Human Heart is the story of a novelist's life lived to the full as it ricochets around a myriad of historical events. Boyd's epic tale charts an entire existence and in doing so reveals that all our lives are ultimately random, defined by luck and seemingly inconsequential choices. As Logan himself says; "I am all of these different people. All these different people are me."

The DVD and Blu-ray features a wealth of extra material befitting of one of the best drama series of the year, including interviews with all three versions of Mountstuart and other key cast members such as Kim Cattrall and Gillian Anderson, a behind the scenes featurette and a fascinating interview with William Boyd as he discusses the journey from page to screen.

HotDVDBD
King Of Thieves, released 21st January 2019 on DVD and Blu-ray from StudioCanal, is the incredible true story of the spectacular Hatton Garden diamond heist, the biggest and most daring in British history. END_OF_DOCUMENT_TOKEN_TO_BE_REPLACED
Comments
Hot Pick

HotDVDBDUHD
After more than thirty years of service as one of the Navy's top aviators, Pete 'Maverick' Mitchell is back where he belongs as Top Gun: Maverick flies onto DVD, Blu-ray and 4K UHD 31st October 2022 from Paramount Home Entertainment. END_OF_DOCUMENT_TOKEN_TO_BE_REPLACED
Top PicksView