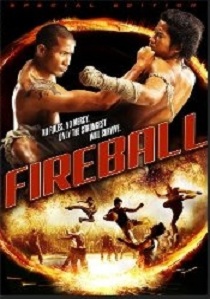 Eschewing plot complexities in favour of all-out action sequences, Fireball combines the breakneck paced sport of basketball with the bone crushing brutality of Muay Thai fighting and mixed martial arts for an action movie experience quite unlike any other. Recently released from prison, Tai discovers that his twin brother Tan is in a coma after being beaten to near-death by a rival. Further investigation reveals that in order to raise money to secure Tai's early release, Tan had become involved in an illegal and deadly but highly lucrative underground sport known as Fireball, a no-holds-barred combination of basketball and martial arts in which ruthless murder is simply part of the game.

Seeking revenge on the man responsible for his brother's condition, Tai poses as Tan and infiltrates the gangster-run world of Fireball by joining a team consisting of equally desperate individuals, including a Thai boxing champion out to prove himself, a Thai-African in need of money to support his impoverished family, and an old friend of Tan's with a mysterious past. After entering the latest Fireball tournament, Tai and his teammates are forced to risk everything, including their lives, by fighting their way to the final round of the championships in an arena from which several of them may not return.

Along the way, Tai determines to identify his brother's attacker and exact his revenge no matter what the cost to himself or those around him. Breathtakingly paced from start to finish and featuring numerous extended scenes of stunning sports and explosive martial arts choreography, Fireball is a truly exhilarating action movie guaranteed to bludgeon viewers into submission and leave them as exhausted as its protagonists by the time the final credits begin to roll.