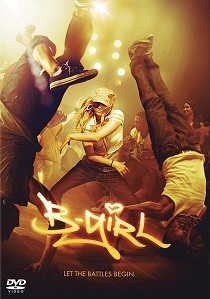 On the 12th October 2009 let battle commence when B-Girl is released on DVD by Anchor Bay Entertainment. Introducing Jules Lady Jules' Urich (MTV's America's Best Dance Crew's Beat Freaks, You Got Served, Step Up 2), Wesley Jonathan (Roll Bounce, Steppin: The Movie) and Ivan "Flipz" Velez (Stomp The Yard, Honey, You Got Served, Stick It). B-Girl features some of the biggest and best b-boys in the world today, including FleaRock, Legacy, Remedy, Steelo, and many, many more. A non-stop dance-fest that will have you on your feet and bouncing to the beat, B-Girl is the break-dance sensation of the year.

Angel (Jules Urich) is never more alive than when she's dancing and break-dance is her chosen style. It's all about battling  trying to out-dance an opponent. She has all the moves, is brave, strong, a little bit reckless and one of the hottest b-girls on the Brooklyn scene. However, a brutal attack by her ex-boyfriend Hector leaves her best friend dead and Angel fighting for her life.

Becoming a weak, insecure shell of her former self, Angel runs in fear and anger from everything and everyone, including herself, and moves across the country to her mother's house in Los Angeles. Isolated in LA with no friends, no community and no dance, her mother Gabby becomes terrified that dancing will destroy Angel if she ever starts again. Dancing is all Angel has and she is lost without it.

Her grandmother, Crescencia de Santiago, recommends that she visit a therapy group at a local church to try and overcome her fear. Angel goes to the church grudgingly, but finds something unexpected: in the basement is an open break-dance practice session for East LA kids.

Unable to get the images of the dancers out of her head and, after meeting Carlos (Wesley Jonathan), a local teacher and former b-boy, she steels her courage and returns to the church. She earns an invite to join their crew and begins to dance again.

Angel realizes that her life has become driven by fear; she and her mother are both scared and alone and taking it out in the worst place  on each other. Gabby realizes how fundamental dance is to Angel's life, and the two women find a common ground - and Angel finds a place in her new home. She begins to trust again. Then she takes her strength onto the dance floor

B-Girl is the story of Angel's journey to become the woman she once was. This b-girl has to learn how to be. If you liked You Got Served, Stomp The Yard, Step Up and Save The Last Dance, then you'll love B-Girl. Pick-up your B-Girl DVD, learn your toprock, downrock and freeze and hit the dance floor!

HotUHD
Say the 'B' word three times and have a wonderful Day-O as Tim Burton's Beetlejuice arrives for the first time on 4K UHD 31st August 2020 from Warner Home Video. END_OF_DOCUMENT_TOKEN_TO_BE_REPLACED
Top PicksView