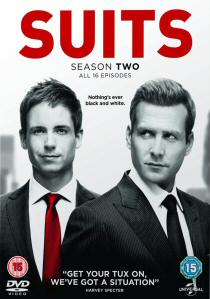 The slick and stylish boys return for another series of the sharpest and wittiest legal drama as Suits: Season Two arrives on DVD from 13th May 2013 from Universal Pictures (UK).

Recently renewed for a further two seasons and Dave's number one TV show, Season Two of Suits is positively brimming with complex cases, sharp wit and banter. So dig out your best suit and get ready to step back into the courtroom as the drama continues.

From the Producers of The O.C, Suits: Season Two stars Gabriel Macht (Love and Other Drugs, The Spirit) as the ruthless Harvey Specter and sees the return of his competitive co-workers; Patrick J. Adams (Lie to Me, Ghost Whisperer) as Mike Ross; Rick Hoffman (Mentalist, CSI Miami, Numb3rs) as Louis Litt; Gina Torres (Gossip Girl, Vampire Diaries) as Jessica Pearson; and Meghan Markle (Remember Me, Horrible Bosses) as Rachel Zane.

The boys are back in season two as we see successful lawyer Harvey Specter (Macht) and brilliant college dropout Mike Ross (Adams) work together to keep up the ruse to their co-workers that Mike is a real lawyer. Together, Mike and Harvey are a winning team. Even though Mike is a genius, he still has a lot to learn about law. And while Harvey may seem like an emotionless, cold-blooded shark, Mike's sympathy and concern for their cases and clients help remind Harvey why he went into law in the first place.

This time, Harvey must decide whether or not to keep Mike on after Jessica reveals that she knows Mike's secret. Meanwhile, the firm's co-founder Daniel Hardman returns after a five-year absence a self-professed "changed man" following the death of his wife. This season features 16 action-packed episodes of bromance, cutting humour and an exceptionally well-dressed cast. The DVD box-set has a courtroom full of exclusive material including deleted scenes, a gag reel and commentary from the cast that takes you even closer to the drama.

Suits is your guide on how to talk, dress and act for success - learn it, live it, love it as Suits: Season Two unfolds on DVD from 13th May 2013 from Universal Pictures (UK).