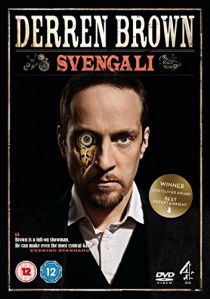 Famous for his hugely popular TV shows such as The Experiments and Apocalypse, as well as theatrical shows including his 2007 show Mind Reader - An Evening of Wonders and his 2010 Enigma, Derren Brown once again creates a magnetic spectacle in his fifth stage tour Svengali, available to own on DVD 1st April 2013, courtesy of Channel 4 DVD.

Directed by Polly Findlay and filmed in front of a live sell-out audience at the Theatre Royal in Nottingham, Brown shows off his remarkable skills as the master of illusionists.

Centered around 'Svengali', a two-hundred year old automaton who has an inexplicable ability to possess members of the audience, brace yourselves for a spectacular performance. See Brown extract secret confessions from the audience, paint an extraordinary portrait and have an audience member possessed by his very own Svengali.

Available to own for the first time on DVD and considered to be his darkest show to date, Brown creates a spine-tingling atmosphere leaving audiences baffled and astonished at the wonders of his magic.

Catch up with Derren Brown's award winning Svengali ahead of his new show, Infamous and be prepared to be amazed, speechless and spell bound.