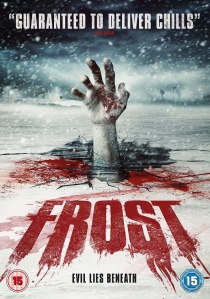 The Thing meets The Blair Witch Project in Frost, the terrifying tale of Arctic survival released on DVD on 10th February 2014, courtesy of Entertainment One. Frost is a highly suspenseful and visually captivating addition to found footage horror sci-fi.

Filmmaker Gunnar (Björn Thors) arrives at a remote glacier camp on the outskirts of the Arctic Circle to meet up with physiologist Agla (Anna Gunndís Guðmundsdóttir) to make a documentary about the research being conducted there. The next day they discover the camp mysteriously abandoned and their co-workers gone without a trace.

As darkness descends and the camp is shaken with ear-splitting shrieks and violent flashing lights, the couple bravely venture out into the vast nothingness frantically following a trail of blood in the snow in the hope that it'll lead them to their missing colleagues, unaware of what they'll find at the other end...