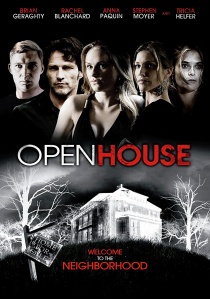 A couple on the verge of a nasty divorce attempt to sell their empty love nest and move on with their lives, separately. Starring True Blood couple Anna Paquin and Stephen Moyer, and directed by Andrew Paquin, Open House is released by Optimum Home Entertainment on 31st January 2011.

After a successful open house they are horrified to discover, days later, that a potential buyer didn't leave their home. While Alice (Rachel Blanchard) is being held captive in the basement, the unannounced house guest moves in upstairs. She senses her capture is being kept a rebellious secret. She knows her only way out if she can only get out alive.

The Fast family returns in the latest adrenaline-charged installment with a never-before-seen Director's Cut of Fast & Furious 9, released on DVD, Blu-ray and 4K UHD 11th October 2021 from Universal Pictures (UK)

Homefront stars Jason Statham as former drug enforcement agent, Phil Broker, a family man who moves off the grid with his daughter, to a seemingly quiet bayou backwater to escape his troubled past. However, Broker's world soon becomes anything but quiet once he discovers that an underbelly of drugs and violence riddles the small town.
Movie quote