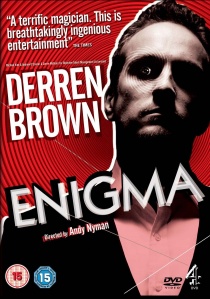 From the man that brought you Seance, The System and The Heist, Enigma, released by 4DVD on 17th January 2011, is Derren Brown's latest sell-out, show-stopping live theatre tour. Brown takes us on a roller-coaster journey of mind-control and séance phenomena with fast pace and razor-sharp humour.

Directed by Andy Nyman, the stunning Enigma was nominated for an Olivier award in February 2010, making it the second of Brown's live shows to be nominated following his 2006 win for Something Wicked This Way Comes.

Filmed live in front of an audience at the New Wimbledon Theatre, Brown selects random members of the audience to participate in a wide range of experiments and demonstrations. The whole audience is hypnotised and a woman finds herself sleepwalking through the rows. Are spirits conjured up in the creepy Spirit Cabinet or is the mesmerised volunteer unwittingly doing Derren's bidding? The whole show punches towards a breathless and unexpected finale.

Since Brown's television work began a decade ago with Mind Control in December 2000, he has grown into a phenomenon with his multi-award winning TV and theatre shows.

Packaged together for the first time, also available to own on the 17th January on DVD is a Live Collection Boxset which features Enigma, Something Wicked This Way Comes and An Evening of Wonders.

HotDVDBDUHD
From the acclaimed director of fan-favourites such as Baby Driver, Shaun of the Dead and The World's End comes the tribute to 1960s London in Last Night In Soho, available to own on DVD, Blu-ray and 4K UHD 31st January 2022 from Universal Pictures (UK). END_OF_DOCUMENT_TOKEN_TO_BE_REPLACED
Top PicksView