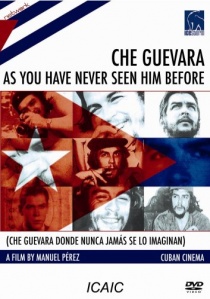 Che Guevara As You Have Never Seen Him Before

News
News Article Go back to homepage
Network is proud to announce the DVD release of Che Guevara As You Have Never Seen Him Before on 19th November 2007. Director Manuel Pérez Paredes offers a unique perspective of the enigmatic Che Guevara in this excellent and informative documentary.
Unknown
Unknown
19/11/2007
Thank you for supporting DVD365.net when you order using the link(s) below. As an Amazon Associate we earn from qualifying purchases
Buy DVD
Information

Network is proud to announce the DVD release of Che Guevara As You Have Never Seen Him Before on 19th November 2007. Director Manuel Pérez Paredes (Rio Negro, 1977) offers a unique perspective of the enigmatic Che Guevara in this excellent and informative documentary. In a style reminiscent of prolific Chilean filmmaker Santiago Alvarez, Pérez incorporates archive footage, unpublished images, interviews and extracts from Guevara's personal diaries to create an intimate portrayal of the celebrated Cuban revolutionary.

Beginning the documentary in 1967, with the capture and execution of Guevara by the Bolivian military, the film then looks back on the experiences that formulated Guevara's political consciousness. The film chronicles his early life, growing up in Argentina, the pivotal motorcycle journey he took around South America, his first meeting with Fidel Castro, his integral part in the Cuban revolution, his career afterwards and ultimately the events which led to his early death at the age of 39.

Ending with the sobering images of thousands of Cubans mourning Guevara beneath a mural of Alberto Korda's iconic photograph of Che, this documentary is essential viewing in understanding the myth and reality of one of the twentieth century's most legendary figures.

UHD
An expert cutter must outwit a dangerous group of mobsters in order to survive a fateful night in The Outfit, released 1st August 2022 on DVD, Blu-ray and 4K UHD from Dazzler Media. END_OF_DOCUMENT_TOKEN_TO_BE_REPLACED
Top PicksView