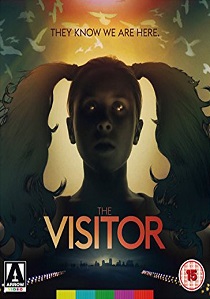 Arrow Video is thrilled to announce the release of the 1979 B-movie sci-fi/horror mash-up The Visitor, available on Blu-ray & DVD from 6th October 2014. A bizarre blend of The Exorcist, The Omen and Close Encounters of the Third Kind, The Visitor was criticised and humorously dubbed 'a turkey made of cement', yet it has recently gone on to become something of a cult classic in its own right.

The Visitor is the ultimate experience in B-movie madness from Ovidio G. Assonitis, producer extraordinaire and director of such deliciously guilty pleasures as Beyond the Door and Tentacles. Described by various sources as "one of the most mind-altering cinematic experiences of the 1970s" and "the Mount Everest of insane '70s Italian movies", The Visitor brings together an astonishing ensemble cast (Lance Henriksen, Shelley Winters and Mel Ferrer to name but a few) in a hallucinatory intergalactic tale of a demonic little girl and her pet hawk. In the words of one astute reviewer, The Visitor is "the most fun you can have in a movie theatre without risking permanent brain damage"!

You may think you've seen it all, but NOTHING can prepare you for The Visitor! The ultimate excursion into B-movie madness, this 1979 cinematic oddity from schlock producer extraordinaire Ovidio G. Assonitis, director of such deliciously guilty pleasures as Beyond the Door and Tentacles, brings together an extraordinary ensemble cast in a mind-bending tale of a girl and her pet hawk.

At first glance, Katy Collins is just like any other normal 8-year-old girl - but appearances can dangerously deceptive. As it turns out, Katy is the Earthly incarnation of an ancient evil by the name of Sateen - an intergalactic supernatural entity who was vanquished many light years ago. Katy possesses tremendous powers making her capable of great destruction - powers which some are keen to eradicate, and some to harness...