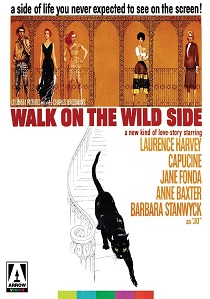 NewsDramaRomance
News Article Go back to homepage
In a lurid drama of love and lust set in Depression era New Orleans, Arrow Video is proud to present the 6th September 2021 release of provocative picture Walk on the Wild Side for the first time on Blu-ray, in a brand 4K new restoration.
Jane Fonda, Laurence Harvey, Barbara Stanwyck, Capucine, Anne Baxter, Joanna Moore
Edward Dmytryk
Charles K. Feldman
Arrow Video
1 hour 56 minutes
06/09/2021
#WalkOnTheWildSide
Thank you for supporting DVD365.net when you order using the link(s) below. As an Amazon Associate we earn from qualifying purchases
Buy BD
Information

A side of life you never expected to see on screen! Jane Fonda, Laurence Harvey, Barbara Stanwyck and Capucine give exceptional performances in this lurid drama of love and lust set in Depression era New Orleans.

Once in New Orleans, Dove is devastated to discover that she has been reduced to working in the Doll House, a high society bordello run by ruthless madam Jo Courtney (Barbara Stanwyck). But when Dove tries to take Hallie away he finds himself fighting for his life against bordello thugs and the jealous Jo who wants Hallie for herself.

Based on the novel by Nelson Algren, with an Academy Award nominated title song, a screenplay co-written by Ask the Dust author John Fante and featuring a stunning title sequence by Saul and Elaine Bass, Arrow Video is proud to present the 6th September 2021 release of this provocative picture for the first time on Blu-ray, in a brand 4K new restoration.

DVD
In Brian And Charles, released on DVD and Blu-ray 10th October 2022 from Mediumrare, an inventor lives alone in a remote village in the countryside, inventing useless things out of found objects in his garage. That is until ... END_OF_DOCUMENT_TOKEN_TO_BE_REPLACED
Top PicksView