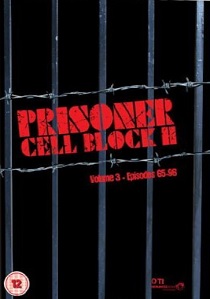 Shock Records and Fremantle Media are proud to announce the UK DVD release of Prisoner Cell Block H: Volume 3 on 12th October 2009. Available for the very first time on DVD in the UK, this must-have collectors' edition 8-disc DVD box set contains episodes 65-96 of the cult television series, following on from the huge success of the first 2 volumes.

Based inside Australia's fictitious Wentworth Detention Centre, Prisoner Cell Block H was televised in Australia for 8 years from 1979 for an incredible 692 episodes, and eventually aired on UK television screens in 1987. Originally named Prisoner for its home audience and re-titled Prisoner Cell Block H for overseas viewing, the series became one of the most watched Australian soaps of all time.

Made by Grundy Television, Prisoner Cell Block H was the first of its kind, tackling issues such as rape, homosexuality, murder and violence. The controversial TV series broke all of the rules set out by previous Aussie made soaps such as The Young Doctors, The Sullivans and The Restless Years - no pretty young faces, no nice homes and no romance. This surprised everyone who tuned in during the first airing. Nobody knew what to expect about a drama series set inside a prison for women. The nation was immediately hooked. Featuring an indulgent 25 hours of footage from an unforgettable section of the Prisoner story, this beautifully packaged 'Volume 3' box set is laid out over 8 discs and is a must for any fans of the hit series.

UHD
Fast forward to the 1980s as Wonder Woman's next big screen adventure finds her facing a wide array of foes including Max Lord and The Cheetah as Wonder Woman 1984 flies in on Blu-ray and 4K UHD 22nd March 2021 from Warner ... END_OF_DOCUMENT_TOKEN_TO_BE_REPLACED
Top PicksView