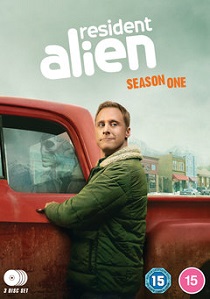 A comedic sci-fi drama series based on the Dark Horse comic book series of the same name, Resident Alien follows a crash-landed alien (Alan Tudyk) who must take on the identity of a small-town Colorado doctor and somehow find a way to fit in with the local human population.

While attempting to complete his secret mission on Earth, he is forced to consider the possibility that humans might be worth saving after all.

The DVD set contains all 10 episodes from the first season and is released on DVD 8th August 2022 from Fabulous Films.

UHD
The end of the line is only the beginning in a wild, non-stop thrill ride through modern-day Japan as Bullet Train is released on DVD, Blu-ray and 4K UHD 24th October 2022 from Sony Pictures Home Entertainment END_OF_DOCUMENT_TOKEN_TO_BE_REPLACED
Top PicksView