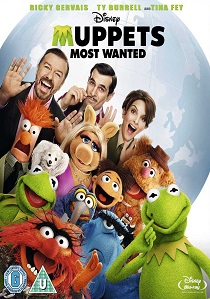 The Muppets are back as Disney celebrates the home entertainment premiere of Muppets Most Wanted on Blu-ray and DVD from 11th August 2014.

Join Miss Piggy, Kermit the Frog and the gang as they take on the world in an exciting and hilarious new spy thriller that will take you on a whirlwind adventure of mistaken identity, dastardly sidekicks and double dealing doppelgangers. Featuring a larger than life-sized dose of all new, never before bonus material on the Blu-ray, it's the must-own family film of the Summer! Muppets Most Wanted will also be available for digital download from 4th August 2014.

Muppet fans, of all ages, will cheer as the entire gang reunite on a global tour, selling out grand theatres in some of Europe's most exciting destinations, including Berlin, Madrid, Dublin and London. But mayhem follows the Muppets overseas, as they find themselves unwittingly entangled in an international crime caper headed by Constantine-the World's Number One Criminal and a dead ringer for Kermit-and his dastardly sidekick Dominic, aka Number Two, portrayed by Ricky Gervais (The Office, The Invention of Lying). The film is packed with celebrity cameos but also sees star turns by Tina Fey (30 Rock, Mean Girls) as Nadya, a feisty prison guard and Ty Burrell (Modern Family, Mr Peabody & Sherman) as Interpol agent Jean Pierre Napoleon.

Featuring all new and exclusive bonus features including Rizzo's Biggest Fan, On Set With Walter, Inside The Gulag, The Longer, Longest Blooper Reel In Muppets History as well as the amazing "I'll Get You What You Want" music video performed by Brett McKenzie. It would be Muppets madness to miss out!

Disney's Muppets Most Wanted is directed by James Bobin and produced by David Hoberman and Todd Lieberman. Bobin co-wrote the screenplay with Nicholas Stoller, who is also executive producer with John G. Scotti. Featuring music from Academy Award®-winning songwriter Bret McKenzie, Muppets Most Wanted is released on Blu-ray and DVD on the 11th August 2014.