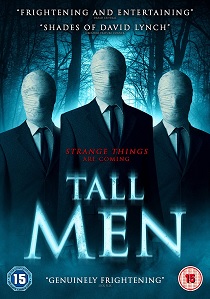 Strange things are coming. When Terrence's spending gets way out of control, he receives a mysterious application for a new black credit card. Before long he is splashing out on new cars and gifts to impress his girlfriend. But Terrence hasn't read the small print, and very soon a group of strange, faceless men in black suits are looking for him. Are they from the bank, or has Terrence signed up to something altogether more evil and supernatural?