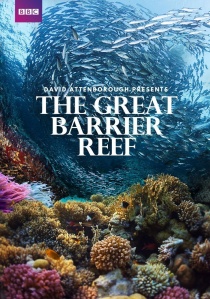 From the award-winning team behind the triple Emmy award-winning series, David Attenborough's First Life, Great Barrier Reef with David Attenborough, released on DVD and Blu-ray on 25th January 2015 courtesy of Koch Media, uses pioneering camera technology and draw on the latest research to investigate the reef in revelatory ways, including using satellite scanning to show the 2,300km expanse of living coral, and revolutionary macro lenses that will capture the reef's tiniest, normally unseen, life-forms.

Combined with David Attenborough's masterful storytelling on location and trademark engagement with wildlife, this series will provide a uniquely authored insight into a global treasure, and uncover the history and secrets of this richly bio-diverse landmark.

Attenborough first filmed on the Great Barrier Reef for Zoo Quest in 1957, and has retained a passionate interest in its diverse wildlife and its unique status as the world s largest living organism. Using the combination of cutting-edge technology, innovative filming techniques and ground-breaking new research, Attenborough will show the full complexity of this rainforest of the ocean.

David Attenborough says: People say to me, 'what was the most magical thing you ever saw in your life? ...and I always say without a word of exaggeration, the first time I was lucky enough to scuba dive on the Great Barrier Reef. As I entered the water I remember suddenly seeing these amazing multi-coloured species living in communities... just astounding and unforgettable beauty. So I'm very excited to be returning to the reef with all the latest technology and science to see one of the most important places on the planet in a whole new way.

DVD
For the first time in the cinematic history of Spider-Man, our friendly neighborhood hero's identity is revealed in Spider-Man: No Way Home, released on DVD, Blu-ray and 4K UHD 4th April 2022 from Sony Pictures Home ... END_OF_DOCUMENT_TOKEN_TO_BE_REPLACED
Top PicksView