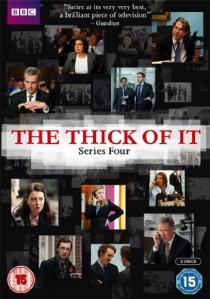 The Thick of It is back. Packed with political double dealing and sharp satire, Armando Iannucci's universally acclaimed forth series is released on DVD by BBC Worldwide Consumer Products on 19th November 2012.

The Thick of It has won a host of awards including the comedy award at The South Bank Show Awards, 2 Royal Television Society Awards, 2 Baftas and a National Television Award plus the series is also nominated for 4 Broadcasting Press Guild Awards taking place this month.

HotDVDBD
From the producers of Nobody and John Wick comes a bare-knuckle, coal-dark holiday action-comedy that says you should always bet on red as Violent Night sledges in on DVD and Blu-ray 6th March 2023 from Warner Home Video. END_OF_DOCUMENT_TOKEN_TO_BE_REPLACED
Top PicksView