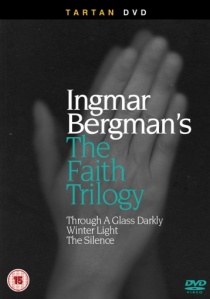 News
News Article Go back to homepage
Between 1961 and 1963, Bergman embarked on three films thematically concerned with man's relationship to God and the futility of spiritual belief. Together these films form The Faith Trilogy, released by Tartan Video on 28th January 2008.
Tartan
Unknown
28/01/2008
Thank you for supporting DVD365.net when you order using the link(s) below. As an Amazon Associate we earn from qualifying purchases
Buy DVD
Information

Between 1961 and 1963, Bergman embarked on three films thematically concerned with man's relationship to God and the futility of spiritual belief. Together these films form The Faith Trilogy, released by Tartan Video on 28th January 2008, which proved a turning point for the director, firmly establishing a strong on-going collaboration with renowned cinematographer Sven Nykvist as well as exhibiting his mastery of direction.

Academy Award-winning Through A Glass Darkly (1961) is an intense drama about the emotional impact Karin, a schizophrenic girl has on three men - her doctor husband (Max Von Sydow - The Seventh Seal), who's struggling to find a cure, her helpless father and her brother. It leaves a lasting impact on the paranoia of contemporary life with regular leading lady Harriet Andersson (Sawdust & Tinsel; Summer With Monika) giving a memorably haunting performance as Karin.

Winter Light (1962) is a powerful tale of how man defines his relationship to God and the search for spiritual belief. Bergman regular Max Von Sydow plays a disillusioned fisherman, whose wife suggests he finds solace from his local priest (Gunnar Björnstrand (Through A Glass Darkly; Persona). But the priest himself is struggling with his own spiritual crisis, finding support from the local school mistress (Ingrid Thulin - The Magician/ Cries & Whispers). Bleakly powerful.

The Silence (1963) offers a sombre view of two sisters forced apart by a desperation to fulfil their desires. Ester (Ingrid Thulin) and younger sister Anna (Gunnel Lindblom - The Seventh Seal; The Virgin Spring) take a train journey with Anna's son Johan. They arrive in a foreign town where they don't know the language. Anna seeks solace in a man she meets in a club which brings her into conflict with her sister. A shattering vision of despair which challenged censorship at the time.

UHD
In Disney's Mulan, released on DVD, Blu-ray and 4K UHD 10th November 2020, a fearless young woman risks everything out of love for her family and her country to become one of the greatest warriors China has ever known. END_OF_DOCUMENT_TOKEN_TO_BE_REPLACED
Top PicksView